I always enjoy looking at how “innovation methodology” has existed throughout history, long before today’s Silicon Valley buzzwords.

Basketball is unique among modern sports in that it was invented from scratch by one guy: Dr. James Naismith, on an afternoon in 1891. By any definition, is has been a very successful invention. So let’s look at it through a modern innovation framework:

Understand
Any innovation process begins with deep understanding of the problem to be solved. The Stanford d.school calls this part of the process “Empathy”, because human-centric design requires deep insight into the actual humans who will use the innovation. Naismith began with simple insight: as a teacher at the YMCA training school in Massachusetts, his student athletes needed indoor sport for keeping fit during the cold New England winters. A very clear, concise problem to be solved.

Prototype
One cold afternoon in 1891 he gathered his student athletes in the gymnasium and nailed a peach basket to the wall at either end of the gym. He split the students into two teams of 9. “I told them the idea was to throw the ball into the opposing team’s peach basket,” he said in a recently discovered recording, “I blew a whistle and the first game of basketball began.”

Observe
As Naismith watched that first game it was complete chaos as the players tackled each other, yanked the ball away, and piled on as if this was rugby on a hard gymnasium floor. Clearly this first version was going to get them hurt, not fit.

Iterate
So Naismith iterated on his invention. He added a few rules: once you receive the ball, you must stop running. Pushing, tripping, or holding another player results in a foul. He wrote out 13 rules for the game of “basket ball” (see pic below of his original rules). This became, in today’s Silicon Valley parlance, his “Minimum Viable Product”. They played again a few days later, this time with the newly-defined rules, and things went much more smoothly. A game had been invented.

Observe and Iterate Again
While watching his “Minimum Viable Product” in use, Dr Naismith noticed a significant bottleneck: each time a team scored by getting the ball into a peach basket, they had to stop the game and get out a ladder to retrieve the ball. So Naismith cut the bottom out of the peach baskets so that the ball would fall through, speeding up the pace of the game. Observe and improve; observe and improve.

Test with more users
In Silicon Valley today everyone wants to get “beta users” to try out their new innovation. Conveniently, since Naismith was the Physical Education Director at the International YMCA Training School, he had an excellent pool of “beta users” to continue to try his new invention while he observed, refined the rules, and listened to input from his “users”.

Continuous Iteration
But iteration is an ongoing process. The baskets were originally nailed to the mezzanine balcony of the playing court, but as the sport became popular, spectators in the balcony began to interfere with shots. So the backboard was introduced to prevent this interference, which of course had the additional effect of allowing rebound shots. Over time, as basketball has become a spectator sport, the main drivers for continuous innovation have become audience satisfaction. So things like the 3-point shot were added in 1976, as an innovation to create added excitement for fans.

Diffusion of Innovation
As Everett Rogers wrote in his seminal book Diffusion of Innovations, not every great innovation is able to gain enough adoption to be successful. In Rogers’ framework, diffusion is the process by which an innovation is communicated through certain channels over time among the participants in a social system, finally leading to mass-market adoption. The adoption of basketball is an excellent example – the YMCA (where Naismith worked) was a perfect channel for initially spreading the sport to all of their local clubs. Then World War I broke out and Naismith enrolled in the army as a Chaplain, traveling to the front lines with the American Expeditionary Force teaching basketball to troops wherever he went (and leaving it behind when the troops withdrew – basketball remains very popular in Europe today).  Those American troops came home, went to college, and basketball was quickly adopted as a collegiate sport, starting at Vanderbilt University and rapidly spreading to other campuses. College success, of course, led to basketball becoming a professional sport with the founding of the American Basketball League in 1925. So in addition to being an interesting example of innovation, basketball is also an excellent example of Everett Rogers’ theory of how innovations only gain widespread adoption through a unique combination of influential users, distribution channels, and social tides.

Dr. James Naismith had never heard of Everett Rogers, of course, nor had he heard of Silicon Valley or Innovation Methodology mumbo jumbo. But he found a clear problem to be solved, he had deep understanding of the potential users, and he created a Minimum Viable Product that he iterated on until it was a refined product ready for mass market adoption.

We use the same process for developing digital products today. And any of us would be happy to create something as successful and long-lasting as Dr. Naismith did. 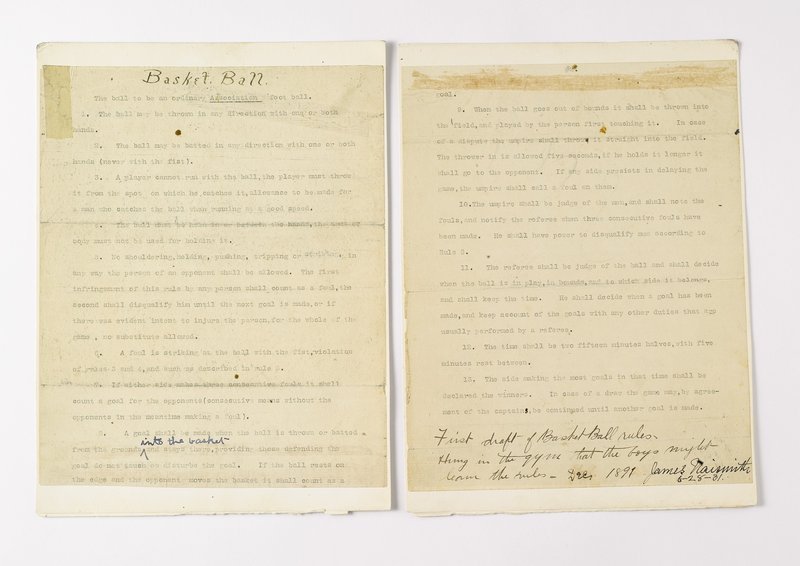