For most companies (including Tivix) software engineers are a very expensive part of the operation, so finding ways to help them be efficient and productive is something we are always working to get better at.

Since the dawn of software development, in fact, there has been debate about how to make software engineering teams more effective. Way back in 1975, Fred Brooks published the seminal book The Mythical Man Month, based on his experience in managing the development of the operating system for the IBM System 360 computer. In a nutshell, he posits that adding to a team size does not speed a project up, and often actually slows it down. Hence, the title of the book.

Since then lots of things have changed, and new methodologies have emerged for managing the human elements of software engineering. Earlier this year a startup called GitPrime conducted a survey of 1,000 professional software developers in US and the UK, to better understand what they feel makes them productive. 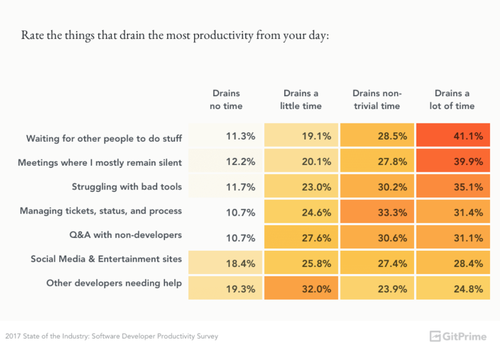 It turns out that the survey respondents feel as if the biggest time sucks are being called into meetings that they don’t really need to be in, and waiting on other people to complete something that their part of the project is dependent on.

There are many other interesting insights in the survey, including the somewhat surprising fact that the respondents said they would like to see their performance metrics measured, quantified, and published, as a way of improving overall team performance.

Lastly, it’s not always about speed, of course. What any manager wants is good quality code, not just code quickly written. The survey respondents said that in judging the quality of a colleagues code, they would look at correctness of code (13.9% of respondents), maintainability of code (12.7%), and readability of their code (12.5%).

It’s pretty interesting stuff. You can see a presentation with the full results of the GitPrime study on Slideshare.