With all the recent hype over virtual reality, I decided to look into developing for VR. I was inspired by apps like Tilt Brush (where you can draw in 3D). So over the last couple of months, I gave VR development a try and quickly realized that it takes a lot of different skill sets. Here’s an intro to what some of the pieces are.

At a minimum, you need a capable phone and something like Google Cardboard for its lenses. The lenses help magnify and focus what you see. Without the lenses, you won’t see VR; just try looking at your phone really closely, its just blurry.

The platform will change how you interact with the app, but luckily development starts off mostly the same because we’ll be using a game engine (a software framework specifically for making games and VR).

Since developing for VR is already a difficult task, I recommend using a game engine like Unity or Unreal. I picked Unity and programmed in C# (though there is an option to use a variation of Javascript if that’s your preference). Unreal uses C++. 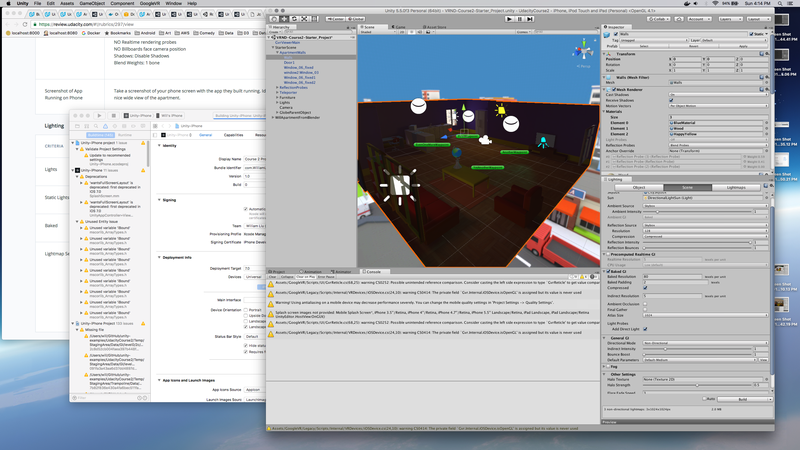 With a game engine, you can focus more on creating content rather than laying the foundation (and even then there’s a lot to learn). The engine handles:

So I mentioned a lot of 3D objects and animations above. Unity is great for putting the pieces together, but it’s not made specifically for creating complicated 3D models, rigging, and animation of those objects. For this you’ll need a 3D creation suite like Blender or Maya.

I found that creating 3D objects was unintuitive. When you move your mouse in 2D, it feels natural. With 3D, I had to relearn even simple navigation so I could rotate and view objects correctly.

There’s a lot I haven’t tried, like creating my own 3D rigging, animations, music, and sound. At this point I realized I couldn’t realistically make everything myself. Luckily there’s the Unity Asset Store where you can purchase or sell these types of assets.

Virtual Reality has some impressive apps already, but its still early. Fundamental issues like locomotion methods haven’t been reliably solved. With the amount of work that it takes to create an immersive virtual reality experience, there’s not as much quality content yet. That said, I think as more developers get used to the tools, we’ll see some really creative uses out of VR.